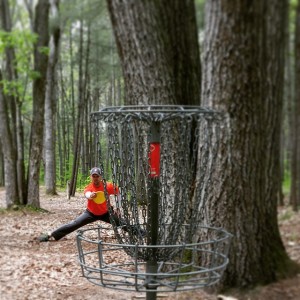 In 2013, my brother in law Chris convinced me to tag along on a disc golf round with him while we were on a family vacation. He’s played for over ten years and is pretty good so it was extremely fun to watch him and attempt to emulate his form along the way. We played a very technical course, much different than a normal golf course that I’m so familiar with – the “fairway” was full of trees and there wasn’t every a straight line to the hole. I had so much fun that I went to a store shortly after and bought my first few discs: Aviar, Wolf, and Beast. I took them to a local baseball diamond to throw and they all went the same distance, barely out of the infield dirt, 150′ maximum. I was determined to get better and learn how to throw it so far and putt so smoothly.  I’ve been hooked ever since.

Now I play as often as I can, hit the local school and park for field work, and I even have a practice basket in my basement. Chris has built a very nice 9-hole course at his house where we practice our game quite often. The course gives us several different shots inside of 200’ and a few at 300’.  Most importantly is the amount of different putts and upshots required to play.

Our local disc golf course is highly rated in the state and offers a great variety of holes too.  The short to short setup is a quick round with a lot of birdie opportunities.  The longer arrangements are more difficult with several holes requiring 600′-1000′ of distance to cover.  The other 18 holes is way more difficult, forcing a lot more precision with many long holes.

I’m a scratch golfer (the one with a ball) and compete in several local golf events, so I haven’t entered in any disc golf tournaments yet. I think that will be changing soon as I’ve been consistently improving and expect to shoot around par or better at most courses I play. I throw drives around 350’ now which is very fun, but I really enjoy the upshots and putting part of the sport.

I started as a spin putter but quickly adopted the push putt approach made popular by Dave Feldberg.  I really like the single lever concept of push putting but I find it slightly difficult to execute, especially at longer distances, so the putting style I use can be described as a smush putt. This is essentially a two lever putting style with both levers working in a line toward the target. Playing several technical courses early on forced me to learn how to straddle putt.  Eventually I found that I was much more consistent putting from the straddle at longer distances.  I can throw 40’ – 50’ putts from a straddle and up to 70’ with a straddle jump style.  Inside of 20’, I’m comfortable performing a strict push putt unless there is elevation, where I generally will throw a more standard spin putt.

We’ll do an in the bag feature at some point but this section should give you an idea of my game.