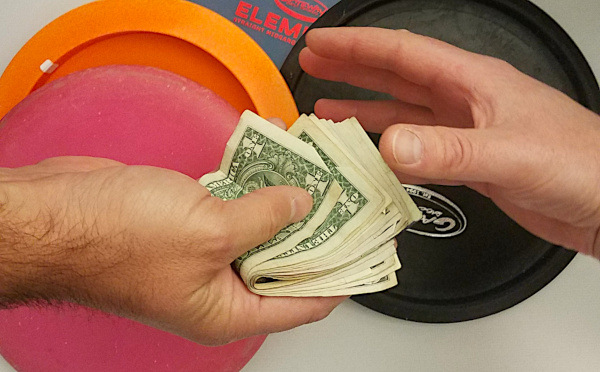 If you play a lot of disc golf, especially at the same course, you might be looking for a way to change things up from the traditional stroke play you usually play.  Or maybe you’re looking for some ways to create competition or simulate stress with a friendly wager.  Whatever your reasoning, we’ve got a lot of alternative side games you can play out on the disc golf course.

We’ve listed a lot of great games for you to try, so a navigation menu seems appropriate.

You’ll play against your opponent but, win or lose, you’re entirely responsible for your score

This game has its roots in traditional golf. You may know it as front/back/totals. You’ll decide on a wager, say $2, and the lowest score for the front, back, and total will win the wager amount. This works best for golfers of similar skill levels but the better player can spot a few handicap shots if needed.

Advanced: There is a version of the Nassau that allows a losing player to press.  It essentially creates a double or nothing deal by closing up the current bet and creating a second one for the remaining holes.  For example, player A is losing to Player B after 7 holes and chooses to press.  Player B is awarded the initial bet ($2) and the remaining 2 holes are played as a new bet.  If Player B wins the last 2 holes, Player B will receive an additional winning ($4 total).  If Player A wins the last 2 holes, the side will be considered a wash with neither player exchanging money.

A one-on-one matchup game where each hole is worth, at most, 1 point. To win the hole, a player must score lower than his or her opponent. A tie, or halve, awards no points. It is possible to close out this match before the entire round has been completed. Match play often requires reading the situation. For example, if your opponent tees first and throws out of bounds, you would likely choose to throw a safe tee shot and play conservatively to earn a point. Or, if your opponent parks an approach, you would likely attempt a “death putt” to force a tie. This is a very fun alternative to traditional stroke play.

Another game with roots in golf. Players in the group agree on a wager per hole, say $1. If two or more players tie on a hole, the value is carried over to the next hole. Winning a hole requires a player to have the lowest score with no ties. It is very possible to have several carryovers, making each hole more and more stressful.

Here is another variant that works best for groups of more than 4 golfers. After the round, any player scoring the lowest score on a hole with no ties wins a share of the skin pot.  Multiple skins will likely be paid out.

Ript Revenge is a card game played during the round.  Players will start with a hand of cards and earn more throughout the match.  Cards have certain rules as to when they can be applied.  You might choose to require your opponent to throw with his or her off hand for the next shot.  Or maybe you’ll create a new, more difficult, teeing area for them.  This game can be a blast to play, just don’t expect to score your best.

A fun addition to stroke play that will force you to get better and also normalize your score. Every throw ending in the basket requires validation to count on the score card. That 100′ putt you just made, yeah, I’m going to let you prove it by doing it again.

Golfers play match play as described above. In addition to earning points for winning a hole, you get to remove a disc from your opponent’s bag too.  Will you take away their only putter?  Or maybe that overstable driver they need for the next shot?

Here’s a one from Joshua Choate:

Any throw that hits metal is awarded a gimme for only a 1/2 stroke.  For example, if your third throw hits the cage but doesn’t go in, you’d get a 3.5 rather than the 4 you’d get if you tap in.  This is really advantageous if you hit the pole on a long approach or if your putt clicks a chain and rolls way outside the circle.  This might be a good game to play when you need to get through your round faster.

Every hole is worth 9 points. Every point is given an agreed upon value, say 25 cents or $1. Toss the lowest score on a hole to get five points. The second lowest score earns 3 points. The worst score gets 1 point. Any ties are averaged so two players tying for the best score will each get 4 and two players tying for the worst score will each get 2. All tie for 3 points each.

This game comes from reddit user jyzenbok (and thanks to Cory P for sending us the link).

The game works best when all players are about the same skill level. The goal is to never have the worst shot.

On every throw all players decide who had the worst shot (whether shortest, up in a tree, OB, etc). Whoever threw the worst shot gets a point. All players then throw again from the prior “worst” shot, starting with the player who got the point. Once your disc is in the basket you no longer have to throw on that hole. If you are the only player to make a shot in the basket (whether a putt or upshot, whatever), that player gets a point taken off of their total score. This encourages players to still run putts instead of trying to lay up closest to the pole. Whoever got the least amount of points on the prior hole goes first on the next tee. The player with the least points at the end of the round wins.

Teams of 2 with Large Groups

You have a larger group who wants to play partner games. Each team of two players will record a score and all team scores are compared at the end.

You’ve probably played or heard of this one. In golf this is called a scramble. Each player throws and the team chooses the best shot. Each player throws again and again chooses the best shot. Continue until the hole is complete. This is a great way to manage groups with a large skill discrepancy and also helps beginner players to ease into the game.

Choose a player to tee off on all odd holes. The other player will lead all even holes. The player who tees off will watch his or her partner throw from the new location until the hole is complete. This can be a fun way to learn new shots and see different parts of the course.

You have a small group who will play together or you’ll do some sort of round-robin or bracket based tournament. Teams of two players will play against a single team rather than the entire field.

See the description above for the bag raid rules, which can be applied to a standard doubles match play.

Another twist on match play doubles. This time, you and your partner throw but your opponent will choose which disc you’ll play from. You better both make the putt…

This one can get crazy, and expensive, really fast. Choose a value for the pebble, say a penny. You and your partner play your own game while your two opponents do the same. Your team score is the concatenation of your individual scores, lowest score first. For example, you throw a 2 and your partner throws a 4. You’ll card a 24. Your opponents card a 33 for a pair of pars. You and your partner earned 9 pebbles each. You can rotate partners each hole to make it even more interesting.

Teams of 3 or 4 with Large Groups

You have a large group who wants to operate as teams of 3 or 4 players. Team scores will be compared to other teams at the end of the round to determine a winner.

A fairly simple game. Your team score is the lowest score of the 4 member team.

Another simple game. Your team score is the total of the best and worst score posted by your 3 or 4 member team.

Teams of 4 or 5 with Large Groups

This one takes some pressure off if you have a bad hole. On the first hole, your team score is the best score of any team member. On the second hole, you’ll card the total of the best two scores as Cha Cha. On the third hole, add up the best three scores, a Cha Cha Cha. On the fourth hole you’ll start over with a single Cha. The rotation continues until the end of the round.

I’m sure there are plenty of games we missed but these are the ones we’ve played and enjoyed (although Pebbles can cause a lot of sour feelings).  If you have other examples we’d love to hear from you.  Submit your suggestions via our Contact form.