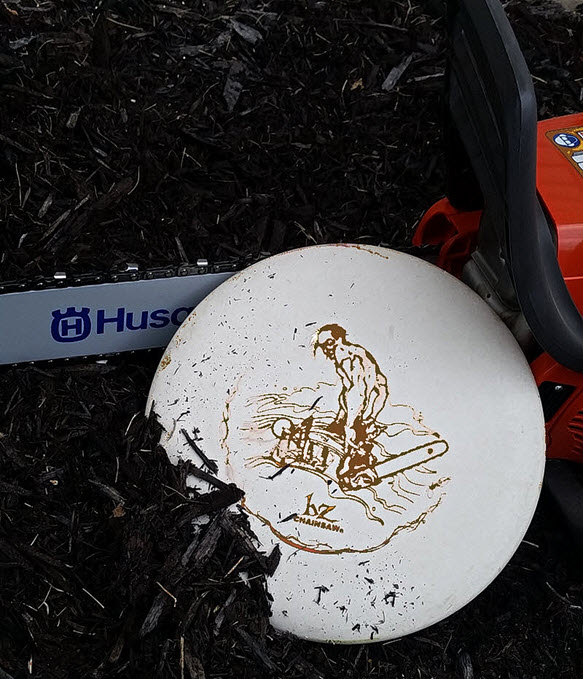 The Black Zombie Chainsaw putter gives you the confidence of a Wizard with added finesse reminiscent of a Warden.  If the phrase “broken in Wizard” appeals to you then you need to try a Chainsaw.  Big thanks to Black Zombie for providing us with this killer putter!

“It is a stable to slightly overstable putter that will hold any line based on your release angle and maintains a well-controlled flightpath.  It is an excellent putter for driving while having that perfect stability inside the putting circle as well.  It is a point-and-shoot masterpiece that will stay close to the basket when your putt and approach game needs dependable accuracy.”

Black Zombie’s Chainsaw has the familiar feel of a Gateway Wizard in the hand, but strangely more comfortable.  The Chainsaw has the top of the Wizard mold but the bottom turns in slightly more and has no bead, somewhat similar to a Dynamic Discs Warden.  This produces a very smooth flight with a large amount of glide.

While it is extremely straight inside 150 it has a tendency to turn on throws with higher power.

Inside 50 feet the Chainsaw is a fairly neutral putter and likes to hold the line it’s put on.  It has a consistent gentle fade at the end of the flight which makes it a great candidate for just about any putting style including turbo and push putting.  At this range the Chainsaw is as good of an all-around putter as I’ve experienced.  This is enhanced by the glide which is a little greater than a Wizard but not quite as high as a Warden, but even with the high glide it is predictable.

Because the bottom of the rim is turned inward it doesn’t roll away frequently, more often it will slide after catching the underside of the nose.  The bottom of the rim has a tendency to catch my fingers on release so I have to be considerate of my release timing, but those with larger hands than myself shouldn’t experience much  trouble.

The Chainsaw is often considered an extremely straight approach option.  I agree with this sentiment inside 150, but I find that the Chainsaw likes to turn when driving further.  The turn is gentle and controllable though so as long as I plan the turn I can throw quite accurate approaches. Head winds, of course, accentuate the turn greatly, but this putter refuses to let a head wind beat it down.  It may be odd to compare a putter to a driver, but I had similar experiences with the Discraft Undertaker where the disc performs well in a headwind and will glide for days without diving down as long as a increased turn is accounted for.

I find my favorite use for the Chainsaw is slight anhyzers and S-curves around 200 feet.  Keeping the anhyzer low helps it recover from the turn and fade out into a gentle landing close to the target.  I can throw higher anhyzers but the turn is more difficult to control at heights.  Light hyzers are also easy with the Chainsaw, the glide helps keep it on long and subtle hyzer lines and allows for a good deal of control.  With more power the Chainsaw flips up on hyzer shots and again is more difficult to control when thrown higher.  Power grips generated excessive turn on the Chainsaw but a fan grip resulted in gentle lines and workable glide, I can shape many shot lines this way.  I also don’t recommend powerful forehand shots, but I found that I could finesse the Chainsaw throwing shorter flicks with a large amount of snap.

The Black Zombie Chainsaw feels great in the hand.  It’s friendly at close distances and incredibly reliable for low power approaches, but it can handle higher power when necessary.  Players looking to add a touch of finesse to their approach game should consider the Chainsaw as a serious contender that won’t fly out of control.  This easy to throw putter should also benefit beginners looking to expand their shot repertoire and improve their shot shaping.