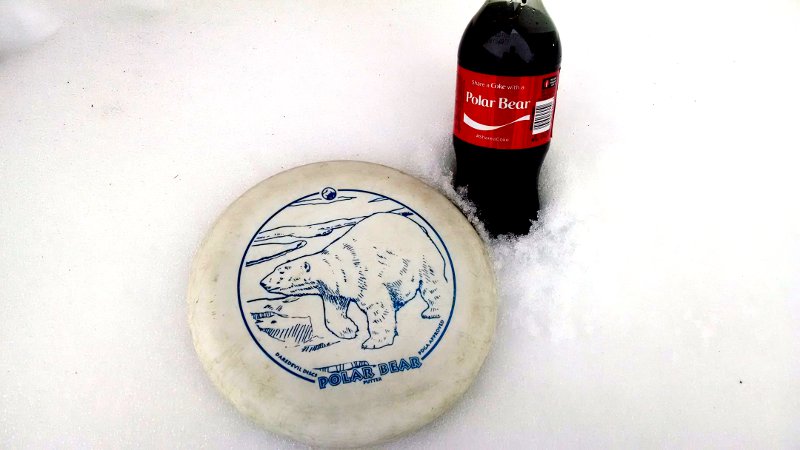 Daredevil Discs is the largest Canadian disc manufacturer and their discs are 100% Canadian made.  Here’s an in depth look at their Polar Bear putter.

“Made from our grippy gummy plastic. The Polar Bear’s shape allows for very stable straight putts and is perfect for short to medium approach shots. PDGA approved – 1st RUN and artwork by Wah Phung-Lu.”

I borrowed this disc from a friend who purchased several Daredevil discs based on the artwork alone.  The plastic is grippy and gummy as described, and isn’t as floppy as other gummy putters we’ve tested.  I feel a slightly deeper rim than an Aviar.

It’s probably worth stating once again that I’m not usually a fan of soft putters.  The Polar Bear is soft, but still a little more rigid than something like the Discraft Soft Focus.  Both Chris and I had a little trouble inside the circle with the Polar Bear, exhibited by a reduced make percentage.  This isn’t an ideal push putt disc and I’m still learning spin putting but I prefer other putters for spin putting.  However I don’t doubt that some extra practice time with the disc could change my mind because the plastic feels good.

The Polar Bear allows a decent turbo putt and Chris had a lot of success with his elevator/air bounce putt.  I think the deeper rim helps trap the air underneath.

All that said about putting, take a look at Daredevil’s own words about this putter: “perfect for short to medium approach shots.”  Chris and I don’t disagree at all.  We all have an awkward approach distance where our normal putt doesn’t work but a full throw isn’t necessary either – the Approach Zone we’ve previously discussed.  This Daredevil putter has a nice straight flight with a small but predictable fade for this short approach shots.  In fact, from 50′ to 100′ we haven’t thrown an easier putter.

I couldn’t get comfortable driving with this putter.  It isn’t particularly torque resistant and the understable tendency makes it a little more finicky than I prefer for longer approaches, especially in windy conditions.  Given a higher launch angle and a hyzer release, the Polar Bear likes to flip up and descend on a straight line.

Each time I look at the Polar Bear, I remember how easy that short approach shot would fly.  If I chose to carry more discs, this Daredevil putter would find a way in my bag for that exact shot.