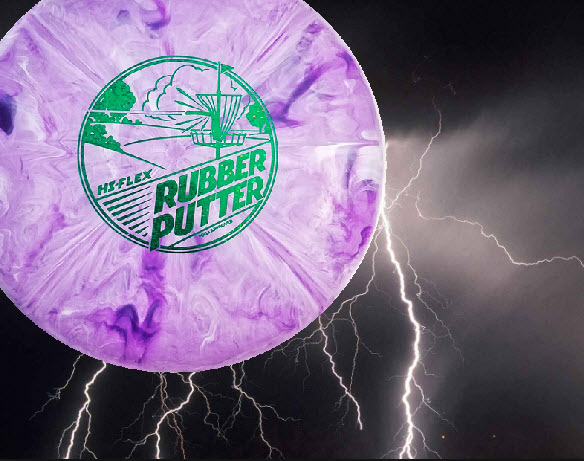 Lightning Disc Golf is one of the few brands beside Vibram to offer a disc made of rubber.  This is the Rubber Putter and we recently acquired one to test.  Lightning often has a reputation of poor quality discs, but we decided to give them a fair shot and it turns out that Lightning’s Rubber Putter is actually a decent disc when used appropriately.

“A rock steady putter and approach disc. It is totally wind resistant, floats in water and is extremely durable.”

The Ligntning Disc Golf Rubber Putter is a pretty disc with the marble/swirl pattern and crisp stamp.  Unfortunately it does not feel great upon first grab.  The Rubber Putter has a high dome, sharp nose, and large bead and likely will not feel comfortable in large or small hands.  The rubber is not nearly as grippy as one would hope.  It is certainly hi-flex as advertised.

The flight chart is accurate, but I thought I should point out that the flight changes dramatically in the wind.  The Rubber Putter is a high glide disc and as a result is often highly affected by wind.

Lightning’s Rubber Putter is a fairly standard point and shoot putter.  Inside 50 feet it is straight and the high glide will hold any putting line.  The high glide will allow you to putt with finesse, but you’ll also need to be careful not to over power it because the glide may cause it to rise on longer putts.  The only difficulty I had putting inside 50 feet with the Rubber Putter was overcoming the high profile for a consistent release, it would sometimes catch my knuckles as it was leaving my hand and it wasn’t as easy to hold at the proper angle.

As with most soft putters, the Rubber Putter does a good job catching chains and rarely bounces out.  As I mentioned above though, the rubber doesn’t offer much more grip than a normal base plastic putter so it won’t give you any advantage when your aim is off slightly to the side.

The Rubber putter is fairly versatile and turned out to be a good flick putting option, although not the most comfortable with the high profile.  I only experienced roll-aways on hard ground when the Rubber Putter landed nose down, but the roll was mitigated by the soft rubber.  This also makes for a decent pitch putting option especially with a tail wind since it has high glide, but it’s too soft to recommend for push putting.

The Lightning Rubber Putter has low speed and high glide which provide good control.  Despite the soft rubber and high glide it is a fairly consistent putter in standard conditions.  I found the Rubber Putter best for 100-200 foot (30-60 meters) approach shots, either straight or slight anhyzer.  The Rubber Putter certainly prefers a fan grip over a power grip which will allow for a smooth straight line when the angle is dropped or if released close to flat it will display a nice understable flight and straighten out toward the end.  The fade is moderate which will help on slight anhyzers, but not enough to pull out of harder anhyzer lines.  It will also take a short and easy hyzer, but beyond 150 feet (45 meters) it will flip up and not likely hold the hyzer line.

The flight of the Rubber Putter was similar to the flight of the MVP Atom, but the feel of the disc is completely different and the Atom is much more of an all-around putter and should provide greater consistency.

Lightning’s Rubber Putter is not a torque resistant disc so forehands have to be very gentle and you will probably not want to throw with a power grip.  Longer and more powerful anyzers are difficult to control with this disc and often turn down and dive.  Windy conditions will throw this disc around, but it can be useful with a tailwind by gliding a little further than other putters before being slapped down.  When the flight plate is exposed to the wind, it will travel with the wind, which could be used advantageously for utility shots or short pan shots, but could also get you in trouble on longer throws.

I had a chance to test the Rubber Putter on a few wooded holes with the hopes that the high flex rubber would prevent bounces.  Unfortunately this disc bounced harder than I expected, then again it is rubber so maybe I shouldn’t be surprised.  I have to believe that the bounce will reduce as the rubber breaks in.

Oh, and the Rubber Putter floats in water.  I actually landed mine in a pond after an ill-advised long anhyzer caught the wind and carried.  This may be a nice feature for a tight course with many ponds.

It may not sound like a great set of characteristics, but if you use Lightning’s Rubber Putter properly it will pay off.  This would be a great option for beginners who don’t have much power and need a high glide approach disc, plus the price is right for someone who may not be ready to invest in discs yet.  I don’t see this in many advanced players bags, but it may have a place for some thrower’s touch shots.  This is also one of the more attractive discs that I have purchased off the shelf, which may not improve performance but may make it a neat gift for a new disc golfer.

Do you know a new disc golfer who could use a beginner friendly putter? Order him or her a Rubber Putter here!