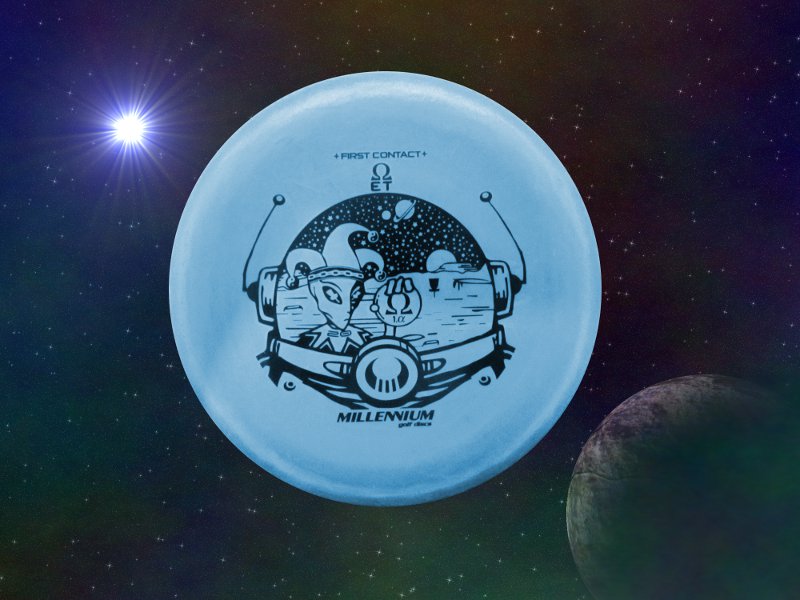 Millennium Discs and the Omega putter began the premium plastic revolution back in the mid ’90s. They recently released the very popular Millennium Omega mold in a new plastic. The new ET plastic is Extra Tacky or Extra Terrestrial – you decide.

“The Omega is a straight putt and approach disc that gives you total control of angle, direction, and speed. It is totally stable in virtually any wind. It comes in several variations.”

Your first reaction to this disc would probably be similar to ours – this feels like an Aviar with a micro-bead. The ET plastic feels a lot like the newer XT plastic Innova has used for discs like the Whale. It is very tacky but also very comfortable. The rim has a decent firmness but the flight plate is very soft.

Special Note: For the review, we picked up a normal version of the disc – no collector’s discs were thrown during this review. The pictured disc is a Limited Edition First Contact ET Omega a friend purchased from Clearwater Disc Golf Store while on vacation in Florida. Thanks to Dan for this awesome collector’s item! 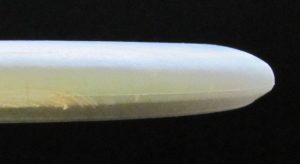 The Millennium Omega putts a lot like an Aviar though the ET plastic is far too flexible for push putting. Spin putting with the Omega yields some nice results. The disc keeps your release angle inside the circle. The soft and grippy ET plastic seems to catch the chains very well, which is amazing when your putt enters on the right side of the basket. Putts hitting left of center for a righty (or the Brooklyn side for any bowlers out there) will tend to bounce away from the chains.

For a putter that was originally released in 1995, I am surprised at how torque resistant the Omega is. Compared to an Aviar Putt and Approach, the Millennium Omega doesn’t turn over on a drive while the Innova Aviar tends to turn and jog right. Don’t let the manufacturer’s numbers scare you off, this doesn’t have as much turn as you’d expect given the -1 rating.

It is very easy to compare the Millennium Omega to the Innova Aviar.  I’d give it an edge over the Aviar based on performance in the wind and overall torque resistance when throwing.  The ET plastic is nice and grippy so if that isn’t your favorite feel there are plenty of other options.  If you are a spin putter looking for a new disc, give the Omega a try in your favorite plastic.