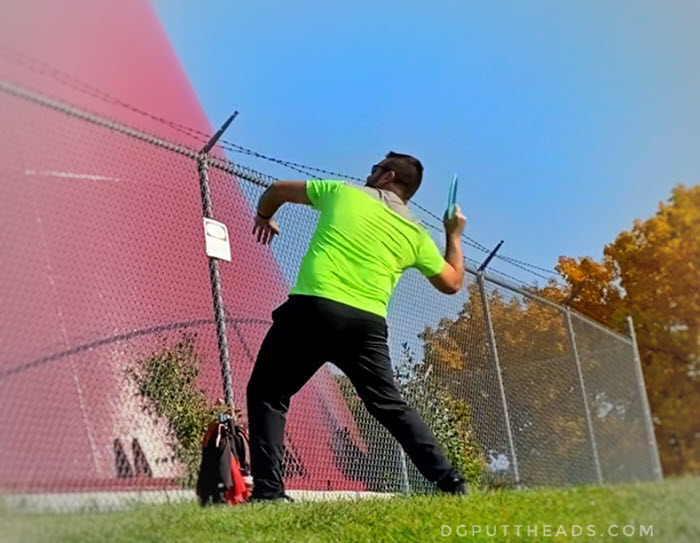 The disc golf overhand shot, also called a Thumber or Tomahawk, is throwing a disc like a baseball with the disc tipped up on its side. Overhand shots are good for throwing over tall obsticals without the disc fading far to the side.

When a disc is thrown overhand it will travel straight upward but as it falls it will begin to turn upside down and move to one side, then it will flip rightside up and move to the other side. The direction it moves will depend on whether you throw a Thumber or Tomahawk which we will cover below. The side to side movement of an overhand shot is usually much less than the sideways movement of a normal shot at that same height. 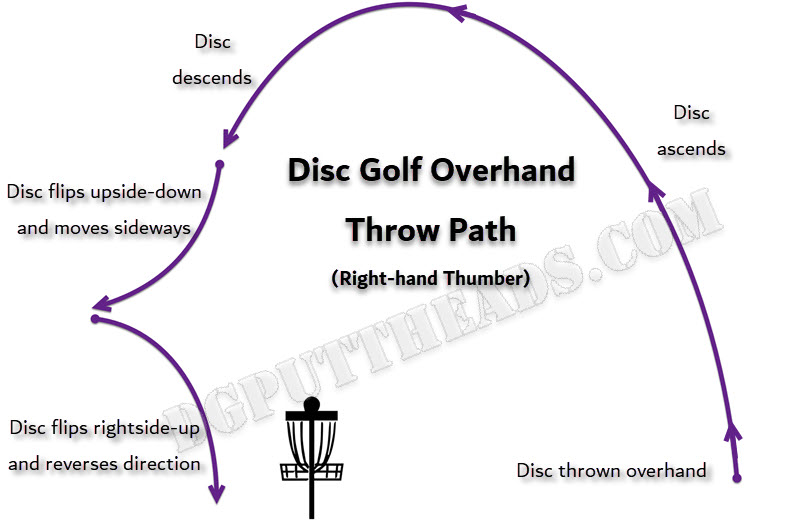 Keep reading to see disc golf overhand technique and a list of the best overhand discs!

Yes, overhand shots are legal in disc golf. In fact, there are no restrictions on how a disc can be thrown. According to PDGA rules:

There are no restrictions on how you throw the disc. You may throw backhand, sidearm, overhand, thumber, or any other way that occurs to you. You can throw it with your foot if you want.

We do not recommend throwing a disc with your feet.

When To Throw A Disc Overhand

Disc golf overhand throws are most often used for high lob shots. This is especially true when your lie is so close to a tree or bush that you do not have enough room to get a normal throw as high as you need it. Another advantage of the overhand shot is that they drop mostly straight with only a little side movement, whereas a normal shot fades to the side as it glides out and may even skip.

Overhand shots can be thrown with your thumb gripping the rim and the underside of the disc facing toward your head; this is called a Thumber. If you throw a thumber with your right hand, it will first move to the left as it falls then the disc will turn over and it will move to the right. Left handed throwers will experience this opposite. 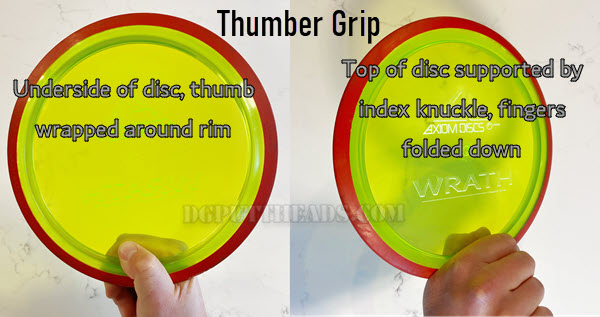 When an overhand shot is thrown with your fingers gripping the rim and the underside of the disc facing away from your head, it is called a Tomahawk. Tomahawks move the opposite direction of Thumbers. A right handed person throwing a Tomahawk will see the disc first move to the right as it falls then move to the left after the disc turns over. Again, throwing a Tomahawk left handed will experience the opposite flight of a right handed Tomahawk. 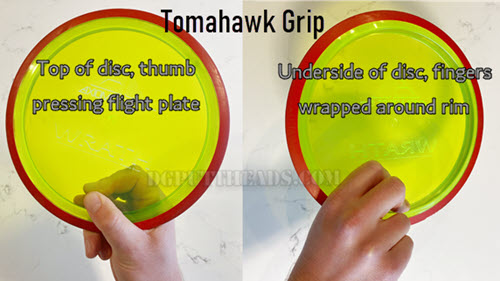 What is the difference between a Thumber and a Tomahawk?

The main difference between Thumbers and Tomahawks is that they move in opposite directions. Another important difference is that most disc golfers can throw Thumbers further than Tomahawks. This is because most people can grip a disc more strongly with their thumb thus throw a Thumber with more snap than they can throw a Tomahawk with.

How To Throw A Disc Overhand

We recommend a simple 3-step movement to throw an effecient overhand shot. After you have selected your target, grip your disc in your throwing hand accordingly (Thumber or Tomahawk) and stand facing your target. Your first step is a medium length step from your non-throwing leg. If you are throwing right handed, you first step with your left foot far enough to put you in a good athletic stance angling your body about 45 degrees from the target.

Your second step is an x-step with your back leg crossing beind your front leg. For more distance you can do a small jump as you pull your back leg behind, known as a crow-hop, which will provide more explosive power. At the same time you draw the disc back behind your head and aim your non-throwing shoulder at your target. This loads your shoulder for more power and puts you in position to rotate through your throw. As you draw your disc back, make sure to keep your elbow up and pointed backward. You also bend at your knees during this step so that you can explode with power during your throw.

Your final step is with your non-throwing leg again, directly at your target. Lead with your hips and push off with your back leg to generate power. Land on the ball of your front foot for balance but transfer weight onto your heel quickly. Pull backward with your non-throwing shoulder while pushing forward with your throwing side chest muscles to generate rotation. Make sure your elbow is out in front of your disc as you throw and snap your wrist forward as you release. Always follow through on your overhand throws. If you stop your follow through early it can put extra stress on your joints and cause injury.

The best disc for overhand throws is an Innova Destroyer. The Destroyer is a fast disc with high glide which helps on long overhand throws, but it also moves side to side less than most discs and is very consistent. Overstable drivers are usually more consistent, but drivers that are too overstable tend to flip over too quickly making the landing more difficult to control. Some discs, especially understable discs, show more side to side movement on overhand throws and are often not predictable. If you are a Discraft thrower you could try a Nuke, or if you prefer Dynamic Discs you may like a Sheriff.

Sometimes fast drivers don’t turn over well on softer more controlled Tomahawk throws, in which case you may need a slower driver such as a Discraft Undertaker or an Innova Beast. These discs will not fly as far as a Destroyer but the side to side movement is very predictable and are great options when more accuracy is needed on overhand shots. Slower discs can be easier to control on overhand throws, but throwing an overhand with too slow of a disc can cause inconsistant flight. A Dynamic Discs Convict or Latitude 64 Saint are also good accurate Tomahawk choices.

Because overhand throws generate a large amount of snap, you may find the best results with a stiffer premium plastic rather than a flex plastic or base plastic. However, each disc golfer has different preferences and you will need to test different discs and plastics for yourself. You may even find that you like the extra movement of an understable disc or that you prefer the early turn of a very overstable driver. 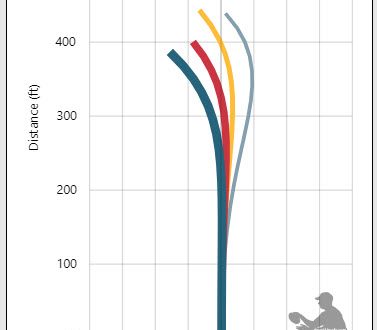