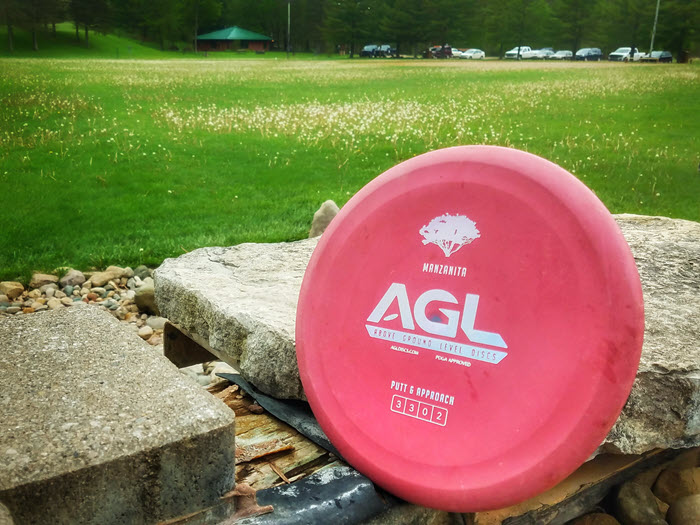 The Manzanita is a low glide, overstable putter which oozes consistency. Approved in 2018, it was one of the first putters molded by Above Gound Level Discs and has developed a following of dedicated throwers. While naming a disc after a tree feels rather ironic, it does not seem to have any negative affect on the Manzanita’s flight.

Here’s Above Ground Level Disc’s description of the Manzanita:

The Manz is our overstable, beadless putter that features a thumbtrack on the plate of the disc. This disc has a flat top and is perfect for off the tee drives, crazy headwind putts and is as consistent as consistent gets. The Manzanita is available in our Woodland and Hemp blend plastics as well as 3 different levels of firmness; Firm/Medium/Soft. We’ve given you zero reasons to not find the perfect disc for you…and if you need 5 of them? Great! Save yourself some dough and get a 5 Pack of Manzanitas to replace that boring old OS putter you’ve been using. Trust us, this disc is what you’ve been looking for!

The Manzanita has a flat top, relatively nutral nose, and a straight lip that ends with no bead. It feels somewhat similar to an Innova Aviar, or perhaps a more rounded Discmania P2, except that is has a small thumbrack on the top. The thumbtrack is close enough to the rim that I rarely put my thumb on it, but it doesn’t get in my way. The plastic is a grippy but firm base plastic.

The Manzanita is close to a point and shoot putter, but slightly overstable near circle’s edge so I aim just a little right. The moderate glide requires a little extra push, but this putter is so consistent that the extra push doesn’t hurt. It doesn’t move side to side much which can add confidence on the longer putt runs. When put on an anhyzer line it turns less than higher glide putters and will pull out of the anhyzer early.

The Manzanita is an excellent putter in the wind. It is controllable in a headwind and I find it is less affected by cross winds than most putters. It also lends itself to nearly any putting style including turbo putting. The only downside push putting with the Manzanita is that it won’t reach the same distance due to the reduced glide, but the glide will increase a little as it breaks in. I found a huge advantage putting with elevation changes and drained multiple 45 foot uphill putts. 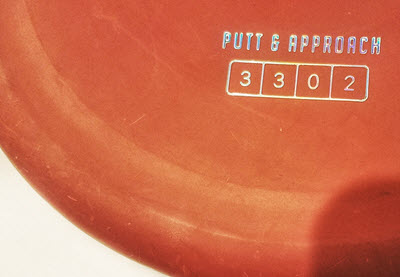 The Manzanita is an excellent driving and approach putter. I feel that the overstablity comes mostly from its resistance to turn and while the fade is reliable, it doesn’t dump. I might compare its flight to a PA2 Psycho or a lower glide Axiom Envy.  As with putting, the Manzanita is quite consistent when throwning and gracefully handles the wind.

When I ratchet up the power I can hit around 250 feet (75 meters), but I find more comfort thowing it between 150-200 feet since it has lower glide. Even at full power the Manzanita barely turns. As expected, it will not hold an anhyzer line for long. It’s certainly not a finess putter, but this makes for great control and consistency.  The Manzanita is great on high hyzer lines where it shows very little side to side movement and fades mostly down rather than to the side.

The only disadvantage I found with the Manzanita is that the pointed rim caught on my fingers during realease a few times while throwing with a fan grip. This did not appear to affect the flight of the disc, but I lost a small amount of distance on those shots. For the record, I have found similar release issues with the PA2 Psycho. This usually occurs less often as the putter breaks in and it may not be an issue for disc golfers with larger hands than myself. On the contrary, the Manzanita relased cleanly on forehand flick shots. 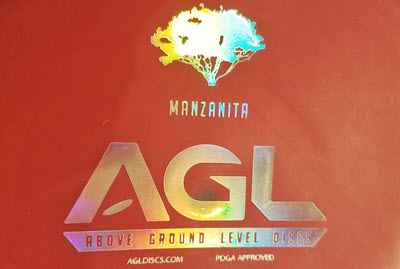 The Manzanita is a great workhorse putter and should be a go-to consideration for any disc golfer looking for consistency. I’d recommend it to intermediate to advanced disc golfers only because beginners may struggle with low glide. I would be surprised if the Manzanita, and AGL, doesn’t quickly increase in popularity.

Take a look at Infinite Disc’s listings for the AGL Manzanita here if you’re ready for confidence in your bag!