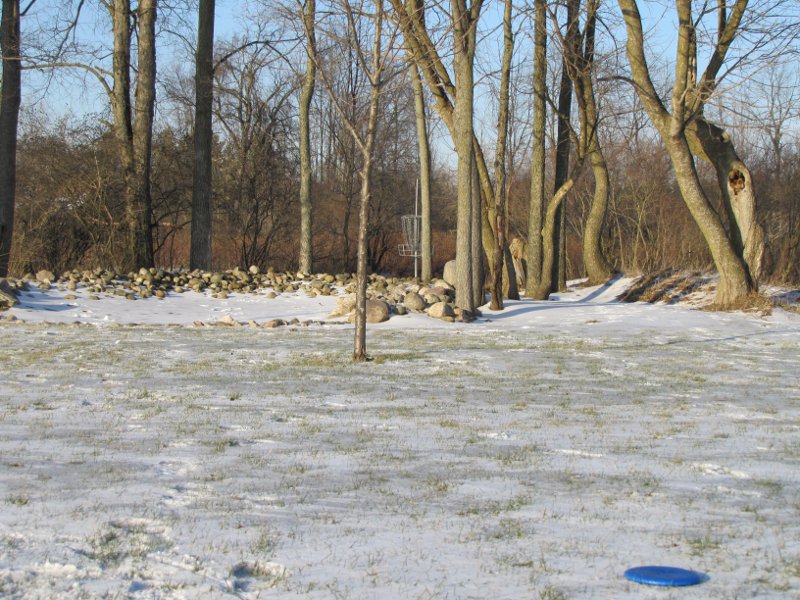 Consider this scenario.  You’re 100 ft from the basket with several trees directly in your line.  The straight line is blocked, an anhyzer won’t work because of the trees, a hyzer won’t work because there isn’t enough room for the arc.  You should probably consider a layup to guarantee the next shot.  But, what if you change your pivot foot and try flick putting?
The example shot pictured above presents many options.  The basket is guarded by many trees at different depths.  On the left side, notice the rocks on the ground.  Those outline a sand trap that conspires with the trees to collect errant shots and add a penalty stroke to your score.  A drive to the left of the fairway will force the golfer to go over this sand trap.  A drive to the center or right of the fairway will tempt us with the narrow path to the right of the basket.  The extreme right and left sides, not fully pictured, also have a decent amount of underbrush that we’d generally like to avoid.
How do we play this shot?  First, we need to understand that our goal is a conversion, not a make. This means we will be happy with a shot that leaves an easy putt.  Next, we should consider the flight path of the many different approach options.  These flight paths aren’t as obvious as you might expect because we generally aren’t throwing an approach with full power.

Anhyzer approaches need enough room outside the target line, on the left for RHBH, in order to activate the turn and glide to the right.  These throws also need enough height  to turn and float, otherwise the disc won’t have time to turn.  Remember, this may differ from your turnover drive if you are accustomed to overpowering a disc on a straight line and watching it turn right.

On this example shot, the anhyzer line is fraught with failure due to the number of trees in the way.  Additionally, we can’t forget about the sand trap that will add a stroke to your score if any of the trees snag your disc or you short-arm the throw at all.

Hyzer approaches are an inverse of the anhyzer line we just discussed.  Since discs always want to fade away at the end you may find a decent hyzer line if there is enough room for the initial straight path before allowing the disc to fade and drop at the basket.  Occasionally though, the short and low hyzers will either skip too far or cut left too early, neither of which leave us in the best position. 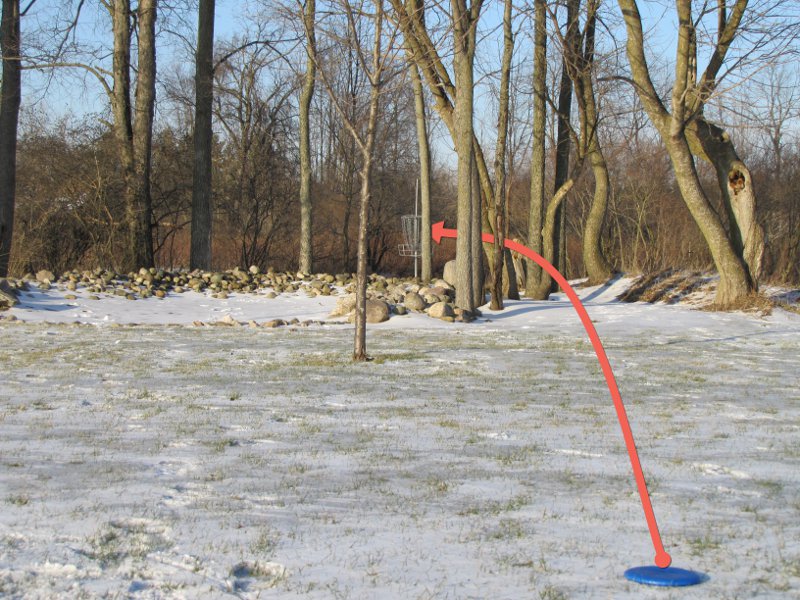 Our example shot with a hyzer is probably the “normal” choice from this position.  Experienced players will like this line because they have practiced touch shots from many different distances with many different discs.

A close relative to the hyzer is the hyzer bomb or spike hyzer.  This shot requires enough height to allow the full flight of the disc.

Clearly, our example shot doesn’t have a great hyzer bomb line.  There’s enough room vertically but a lot of trees block the descent to the basket.  I consider that line too risky since it relies on a lot of lucky bounces.

Other options, depending on the length of your approach, are turbo putts, grenades, and rollers but let’s consider an anhyzer flick with the putter.  The courses we play in Michigan usually have a decent amount of trees.  Even the open field courses tend to place baskets near or under trees.  So the flick putt has become a wonderful option for me.   I see a lot of forehand use on the tee and even for long approaches.  I don’t, however, see many putter flicks for approach shots.  With the correct disc choice, the putter flick offers a solid trouble relief shot.

Take a look at our hyzer line from above.  This shot will follow a similar path with a few small differences.
First of all, I can stretch another 3-4 feet to the right to gain a straighter path to the basket.  From here I can throw an easy flick that flies straight and fades just right at the end to avoid any chance of hitting that sand trap.  Those trees do present the same risk as before, but compared to the hyzer line the disc will be traveling much slower.  This means any deflection should be lighter.

Disc Selection for the Putter Flick

For shorter shots, I like to use an understable disc like a Magic, Swan, or PA4.  For longer approaches, the Judge works well if I need the disc to turn a little and the Wizard works very well for a flex shot that turns left before flattening and gliding.  I’ve also had some fun throwing a high shot with an understable disc like the Reptilian Serpent, which will turn left and flatten into a glide similar to a plane landing on the runway.
Consider the different results you’d get with more glide vs less glide or even overstable vs understable.  Remember that a different plastic in the same mold will perform differently for these touch shots.  Perhaps you want a higher toss that glides for a long way, even when thrown soft.  Or maybe your line involves a low ceiling that needs to drop quickly at the end.  Disc choice here is very important and very personal, so you’ll need to get out and practice.  The best news – you can do many of these short shots in your yard or a small field.

This is very similar to your long range flicks, but here are a few pointers on the technique.

I’m not saying flick putting will become your go-to shot (though I use it a lot), but I think this is worth learning and practicing.  Try it out on the course and let me know what you think. 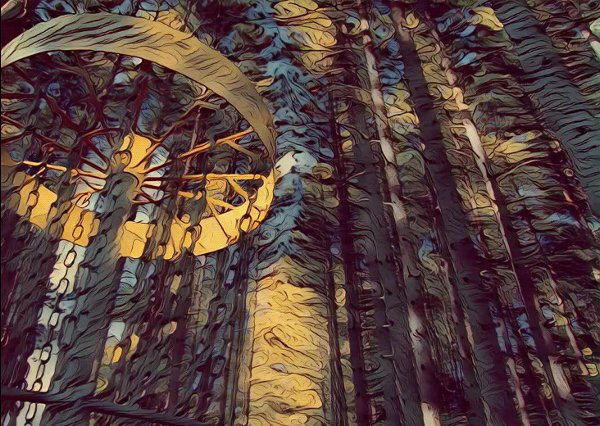 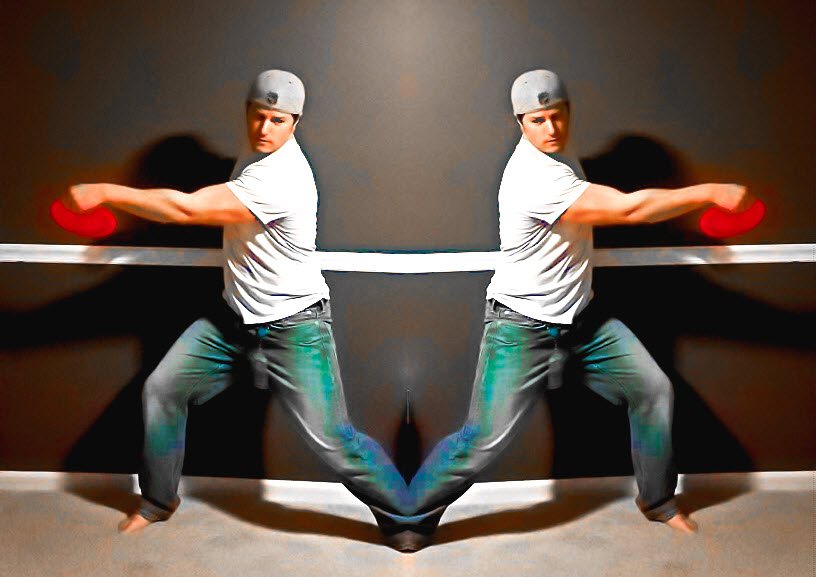 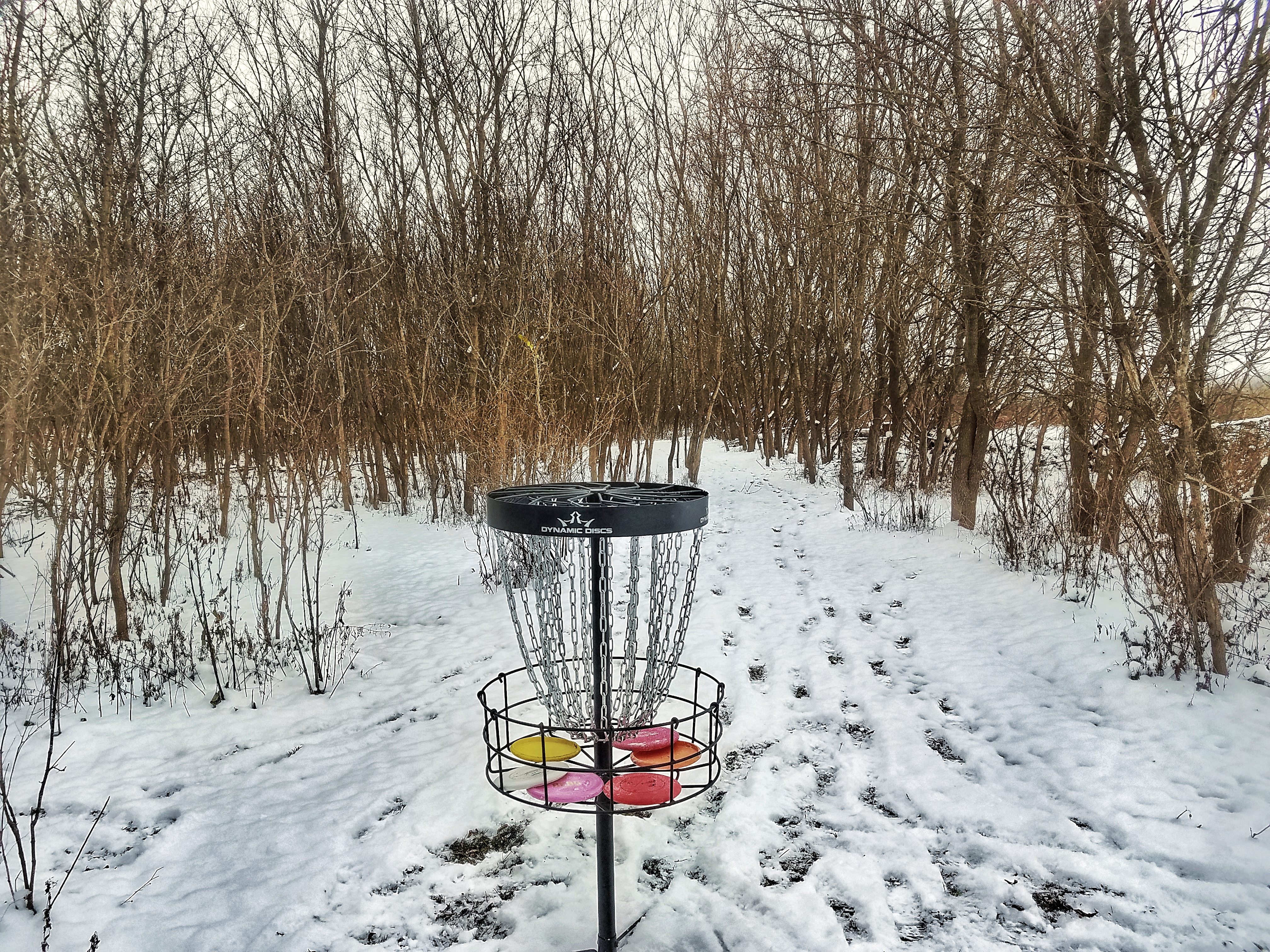